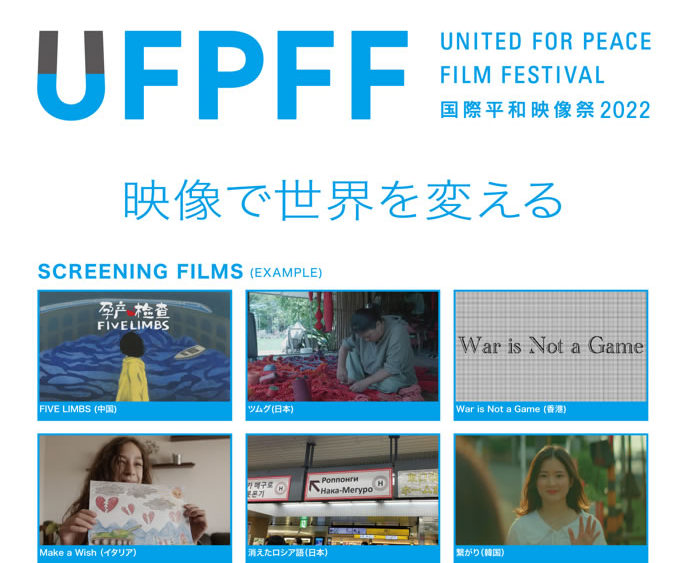 We are pleased to announce the 10 finalists for the UFPFF 2022, selected from among many entries! All films will be screened at the UFPFF 2022 in Nagasaki on September 18, with the director taking the stage and a jury session. 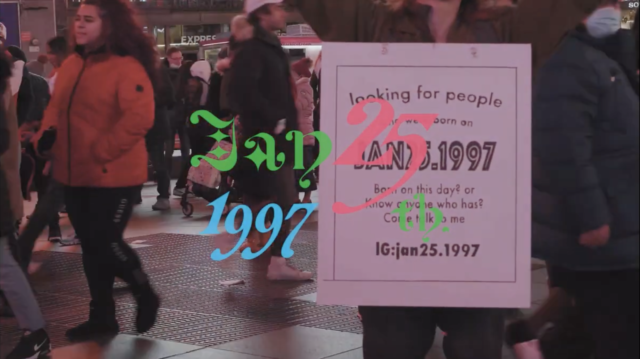 The director, born on January 25, 1997, meets and performs with people around the world with the same date of birth. This work includes activities in New York City in October 2021. The most diverse community that transcends gender, nationality, race, religion, etc. already exists, even for you.

Profile：Based on the physical sensation of “tsutsu” (a tube), which he has acquired from the Japanese dance he has practiced since childhood, he creates performance works and video works using acting.” By repeating the act of “becoming someone else,” he creates an intersection (= “tsutsu” that cannot be replaced by anything else.

Make a Wish is a reflection on the dramatic situation faced by the Ukrainian population fleeing the war.

Profile：I was born on February 12, 2001 and I live in Venice.
I have always thought of people who have difficulty in relating to life. With my projects I try to help them, raising awareness of the population using art.

The whole work is abstract in tone, Ascii technique is used.
Because I think war is absurd and irrational.
So I have to fight the absurd with the abstract.
Also in my work you can see toy soldiers and toy tanks.
For a “War” toys only get damaged, but for real war people do die.
War is not a game, that’s the only message I want to present.

Profile：William Pang, born in Hong Kong in 2003. In love with visual art since a little boy.And a person who make art. Now focus on creative coding & new-media art. Also believe in the power of film.

The problem of poverty in Africa has long been in need of improvement. This time, children, teachers, community members, and volunteers from the town of Susa in the Republic of Malawi told us about the situation. After listening to the stories, everyone thought in their own way about what they could do.

We’ve imagined a future world where due to serious environmental pollution, all the human beings have mutated. Because of the COVID-19, the nuclear radiation, or the haze, human beings begin to deform. However, in order to avoid humans extinction, we start to accept the existence of deformity. Since then, in this seemingly peaceful world, we’ve never seen ordinary people. Through this short film, I hope to arouse all the people’s awareness to protect the world.

Profile：Li Yifan was born in Shanghai, China. Some childhood experiences led her to the idea of telling stories with movies. She came to Korea to study because she likes Korean movies. In the past two years, she has paid more and more attention to environmental and world issues. In the future, she hopes to continue to create together with her friends, makes some works that can relieve people’s hearts and send out some wake-up calls for human beings.

Shin-chan, 41, creates internationally acclaimed ceramic works. Despite his autism, his talent blossomed when he discovered ceramics. Through the story of his support worker, Masaharu IKETANI , 90, who has been the closest person to him in creating the environment and supporting him, this documentary film raises the question of how support should be provided to people with disabilities.

Profile：Takuya Shimada was born in Mihara City, Hiroshima Prefecture, he was introduced to documentary filmmaking in a college class in 2019. Since then, he has continued to work independently, and in 2022, “Memories of War Traced with Grandparents,” which he produced as co-director, was selected for the Grand Prize at the 10th New Prefectural Art Exhibition.

Russian signage was erased at Ebisu Station. This was due to passenger complaints. The war between Russia and Ukraine. Don’t you think it has nothing to do with you? The university I attend has a Russian language department. What do they think about and learn about Russia every day? What became clear to me was the reality that prejudice and discrimination still remain.

Profile：Third-year student in the Newspaper Department of literature at Sophia University. Studied documentary production in Professor Hiroaki Mizushima’s seminar. Her film Cloudy Sky Olympics, in which she filmed herself participating as a volunteer at the Tokyo 2020 Olympic and Paralympic Games, won two awards at the local Jidai Film Festival and the Tokyo Video Festival.

Ellen, an artist, was born as a princess of the Rukai tribe, the indigenous people of Taiwan. In the process of creating her art, she realizes her connection to her homeland, but that homeland was destroyed in a disaster. What can we do for the future of the Rukai? We will look at the driving force behind her artwork.

Profile：From Nagoya, Japan, Takashi Ogawa is a self-taught video creator and enthusiast, with a background in political science from National Cheng Kung University, he has traveled the world exploring the tangible and intangible aspects of Asian culture. His latest work is mainly focused on Taiwanese aboriginal culture and how the elements that constitute it help create a stronger bond between the past and present generations.

A familiar encounter in a strange land, no barriers of any kind exist here. Nahi is a Korean exchange student who happens to meet a Korean (Ryong Ok) living in Japan on the train tracks. Although their upbringing, ideology, and many other things are different, they begin to feel a mutual affinity.

Profile：22 years old and from Kagoshima Prefecture. While studying local economics as a student, I am creating contents that can help solve latent issues in the community and society, even if only in a small way.I started video production in my second year of college as a self-taught artist because I wanted to give visible form to creativity that only I could do. I am creating my work with an emphasis on “what kind of things” and “from what angle” rather than on “what is beautiful.