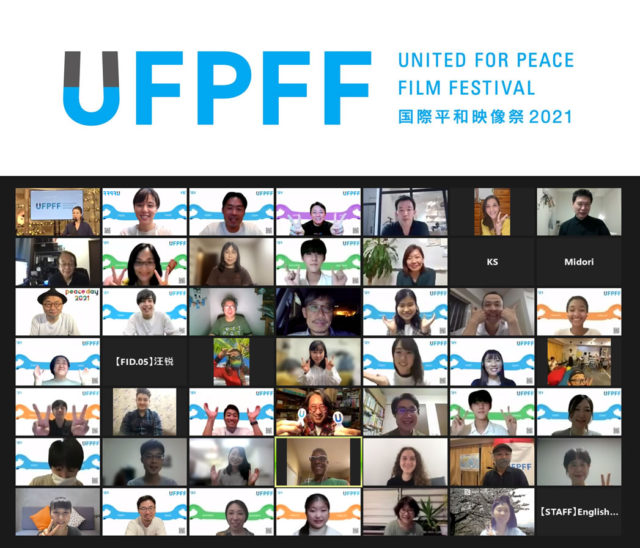 The UNITE FOR PEACE FILM FESTIVAL (UFPFF) was held in conjunction with the UN-designated Peace Day, September 21.
UFPFF2021 was held online on September 20th. The winners of each award are announced below.

Freya wants to participate in a BLM protest but, is met with the dangers of going brought up by her mother. Freya has to decide whether or not this is a cause worth fighting for.

Jasmine is a Junior at Ithaca College and is passionate about film, photography and visual arts. She feels responsible for telling unspoken stories and expressing what she thinks is important.

What we were 75 years ago

What were the feelings of the children who lived during the war, who experienced air raids, worked for their country, or volunteered for suicide missions? Through the stories of ten people who spent their childhood in war, we will get a closer look at the true horror of war.

I begin video editing with my friend in the second year of junior high school. The video was compiled by interviewing the disaster-stricken areas, the environmental education activities of elementary schools, and the efforts of local organizations. Movies for children are also transmitted. In 2019, a film produced with a Chinese friend was selected as a finalist for the International Peace Film Festival.

I have used the cat as a symbol of Iranian’s people because the shape of Iran`s map is the same as cat which sits and it is famous for it. I documented just one scene of an event to show all the people around the world what was happening in Iran in November 2019 and how cruel the regime could be.

I was born in Iran. I received B.S in physics and now I am M.A student in animation directing from Tehran University of Art. I started my professional career since 2010. Since then, I have worked as an animator, lay out , concept and background artist and director in some animated short films, TV series and commercials.

This animation is about an old painter and nature lover who lives on a remote island witnessing the damage that humans are doing to the planet.

Amir Hossein Hosseini is a 17-year old filmmaker who lives in Mashhad, Iran. He made the animation film Goodbye Earth during the pandemic.

This story is a sarcasm to today’ society. This is a made up world, I use Tag to represent the stereotypes for different people. All of the people in society are labeled with different tags since they came to this world. I showed different stereotypes from different aspects, which is gender, body shame, social classes, only use scores to define a student, and job stereotypes. People were tagged by others while they tag other people. They were defined by these tags and never reveal their true self. In the end, they decided to give up all the tags and became their true selves.

Ziyi is a New York-based Artist, Filmmaker. She is currently working at Baidu as animation designer and SFK as part-time portfolio instructor. Graduated from SVA BFA animation(2021), going to Columbia university for graduate study. Her works have been recognized and screened in numerous awards and festivals worldwide. She also participated in multiple animation and game projects. Ziyi strives to create eye-catching dynamic pieces.